November 5. Artsakh/NK civilian population and infrastructure are again the target of the Azerbaijani armed forces 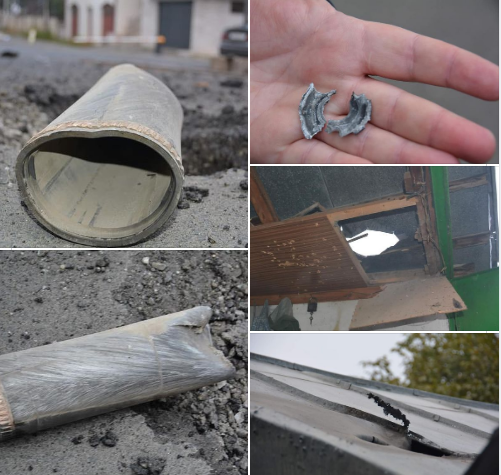 On November 4, the Foreign Affairs Committee of the Netherlands Parliament held a special session on the Azerbaijani-Turkish aggression, hosting the Human Rights Ombudsman of the Republic of Artsakh/NK Artak Beglaryan. The Ombudsman underlined that the international community has a duty to stop the Azerbaijani-Turkish aggression with practical measures, which has caused a serious humanitarian catastrophe in Artsakh/NK.

On his Facebook page, the RA/NK Ombudsman presented data on the damage caused to the civilian population and objects as a result of the Azerbaijani aggression for the period of September 27 – November 3. As per the data, at least 46 civilians were killed and 144 civilians were wounded as a result of targeting civilian objects in Artsakh/NK.

On November 5, the Armenian Unified Infocenter reported that RA/NK Berdzor and Shushi towns and the nearby settlements. were being shelled.

Earlier, it was reported that after midnight, the situation in the peaceful settlements of Artsakh/NK had remained relatively calm. At dawn, Azerbaijan resumed targeting civilians and civilian infrastructure. The scale of destructions and the number of casualties were being clarified. In particular, heavy artillery was deployed in Martuni town and various weapons, including Grad MRL system was used to strike Shushi. The scale of destruction is large. The target was, once again, civilian and public objects. Stepanaket was rocket-struck twice during the day.

NKR Infocenter posted a video and mentioned that children’s right to life and education was violated due to the war unleashed by Azerbaijan.

“The Azerbaijani authorities say they will later live peacefully with Armenians, but these are simply messages addressed to the international community. We see how many crimes are committed out of hatred. We have recorded their words addressed to their domestic audience, by which they show that whatever is said to the international community is just an illusion, as under these conditions, if an Armenian appears under the same  roof with them for even one day, one hour, there is no point  in speaking about the right to life, the right to health”, said the RA Human Rights Defender during the discussion with the MPs in the RA NA.

Arman Tatoyan, the Human Rights Defender of Armenia, hosted today H.E. Nico Schermers, the Ambassador Extraordinary and Plenipotentiary of the Kingdom of the Netherlands to Armenia. During the meeting the Ombudsman presented facts about the damage caused  by the Azeri armed forces to the peaceful population of Artsakh/NK and Armenia.

“Targeting civilian population, the use of prohibited munitions against them, the involvement of mercenary terrorists, propagating hatred towards the Armenians and the atrocities and inhuman treatment by the Azeri armed forces all witness that the assigned mission is to carry out ethnic cleansings in Artsakh deploying terrorist methods”, stated the Ombudsman.

During November 5 press conference, Head of the Department of Criminalistics of the Investigative Committee of Armenia Rafayel Vardanyan stated that according to the preliminary conclusion of the forensic expert, Misha Melkumyan, 84, died in Azerbaijan while being held captive from traumatic brain injury, thus the death was caused by a trauma.

Ilham Aliyev, President of Azerbaijan, confessed that the Azerbaijani army had targeted towns of the Republic of Artsakh/NK. Aliyev spoke about this in an interview given to the Spanish EFE agency. He mentioned that after October 10, Azerbaijan ceased targeting civilian settlements and that they admitted it had been done before. Aliev added that it was done because the Armenian side had allegedly deployed its military subdivisions and equipment in the capital of Nagorno Karabakh.

A number of Armenian civil society organization appealed to the UN Special Rapporteur on the right of everyone to the enjoyment of the highest attainable standard of physical and mental health.
Invoking a number of facts, they requested the UN Special Rapporteur:
📌 engage with the government of Azerbaijan as soon as possible to call an end to the targeting of civilian populations in Artsakh and the consequent detrimental effects on health of civilians in Artsakh and Armenia;
📌 provide objective information and assessment in the Annual and Special reports on the issues related to protection of the right to health for the people of Armenia and Atsakh in the context of the military aggression launched by Azerbaijan.

According to the Armenian Unified Infocenter,  to date, overall 50 civilians have been killed in the Armenian side as a result of the Azerbaijani aggression.