November 8. Throughout the day, the Azerbaijani armed forces kept the Republic of Artsakh/NK capital Stepanakert under rocket and artillery fire 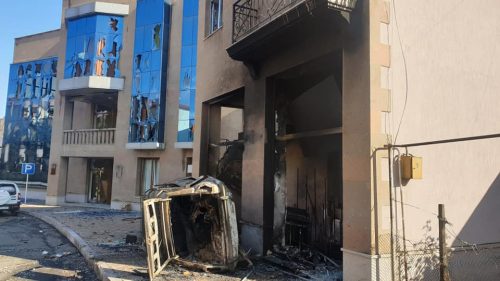 The Armenian Unified Infocenter reported that on the night of November 7–8, in parallel with the battles, the Azerbaijani armed forces also targeted Artsakh/NK capital Stepanakert and Shushi with rocket and artillery systems. Civilian infrastructure was damaged. The night was restless and tense particularly in Stepanakert. Eight long-range missiles were fired at apartment buildings, residential areas, public facilities and other civilian infrastructure in the city. According to the preliminary data, there are no victims. Other settlements remained relatively calm.

NKR Infocenter posted photos and made a caption on the night rocket strikes against Stepanakert. Since September 27, the enemy’s handwriting of targeting civilian population has not changed.

The Armenian Unified Infocenter reported that the situation in the settlements across Artsakh/NK remained stable and tense throughout November 8. The situation in Stepanakert remained calm until 18:30. The city was rocket-struck. There is one wounded civilian. Emergency Service rescuers provided first aid to the wounded and took him to a medical center. His injuries are not life-threatening .

In Martakert, the air raid siren was activated twice during the day. The Azeri airforce attempted to deploy military aviation over the city. The situation in Martuni was restless again. At midday, the Azeri artillery struck civilian infrastructure.

Artsakh/NK  Ombudsman Artak Beglaryan addressed a new video message to the international community on the recent war crimes of Azerbaijan against Artsakh/Karabakh people, destructing the Stepanakert music school and other civilian buildings.

To date, as a result of the Azerbaijani aggression, overall 53 civilians have been killed in the Armenian side.