October 10. Despite the announced humanitarian ceasefire, the Azerbaijani armed forces continued targeting civilian residential settlements: combat UAVs were used in the direction of the Republic of Armenia villages 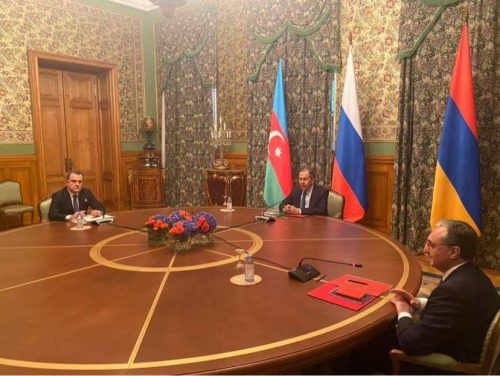 RA MoD spokesperson Shushan Stepanyan reported that after the announcement made by Ministers of Foreign Affairs of the Russian Federation, Republic of Armenia and Republic of Azerbaijan, the Azerbaijani armed forces intensified the use of UAVs in the southern direction.

She reported that ignoring the ceasefire announced for humanitarian purposes effective as of October 10, 12:00, the Azerbaijani units launched an assault in the direction of an area called “Karakhambeyli” at 12:05. The units of the Artsakh Defense Army took the appropriate measures to halt the enemy attack.

On October 10, at around 11:00, the Azerbaijani armed forces employed combat UAVs in the direction of Yeritsvank ruralcommunity of Kashatagh district in the Republic of Artsakh/Nagorno-Karabakh, as well as in Artsvanik community of Kapan in Syunik region of the Republic of Armenia. Artsvanik community head Anushavan Harutyunyan reported that the rocket strikes started at 9:30 and lasted until 11. 1 victim was reported.

Per NKR InfoCenter data, civilian infrastructures of Stepanakert were struck with rockets the same day in the morning.

At the same time, it was reported that the Azerbaijani armed forces launched an air attack using a great number of UAVs. They again targeted Hadrut city of the Republic of Artsakh/Nagorno-Karabakh.

The Armenian Unified Infocenter reported that before the enforcement of the humanitarian ceasefire, the Azerbaijani armed forces attempted a subversive-intelligence penetration in the direction of Hadrut. Though the ceasefire has been in place for hours, military actions were still continuing.

On October 10, Davit Tonoyan, who is the  RA Minister of Defense and Head of the RA Interdepartmental Commission on captives, hostages and missing persons, hosted the delegation led by Head of ICRC Delegation to Armenia Claire Meytraud.

The ceasefire announced for humanitarian purposes and the procedure of actions of exchanging prisoners of war, held persons and corpses through mediation of the International Committee of the Red Cross and in accordance with their criteria was discussed. The procedure is to be coordinated with the authorities of Artsakh/NK.