October 12. As a result of targeting the civilian population, there are at least 34 victims in Armenia and Artsakh/NK 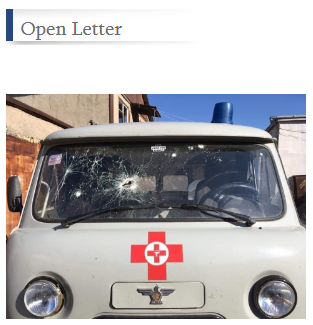 On October 12, the Armenian Unified Infocenter reported that large-scale military operations were continuing in the Hadrut area.

Earlier, the Center had reported that RA/NK capital city Stepanakert had again been targeted.

RA Minister of Health Arsen Torosyan addressed a letter to Director-General of the World Health Organization Tedros Ghebreyesus regarding Azerbaijan’s military atrocities against Republic of Artsakh/Nagorno-Karabakh.  In particular, the Minister expressed his concern regarding the targeting of civilian settlements, infrastructure, and schools along the entire line of contact between NK and Azerbaijan, including in the capital city of Stepanakert, resulting in numerous civilian casualties and destructions. On October 11, in the conditions of the already established ceasefire, Azerbaijan targeted the emergency medical aid car, which was transporting an injured person. The Minister also stressed that the aggression of Azerbaijan is happening in the midst of the global health crisis, which is severely hampering the national, regional and global Covid-19 response efforts and facilitating the spread of the virus.