October 15. Azerbaijan continues targeting civilian settlements of Artsakh/NK and the Republic of Armenia, new deaths and injuries have been reported 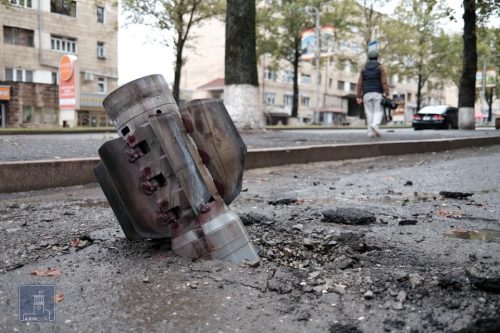 On October 15, Artsakh/NK Ombudsman Artak Beglaryan reported that the Azerbaijani armed forces today have continued targeting the civilian settlements of Artsakh, which is a war crime.

The RA Human Rights Defender Arman Tatoyan wrote on Facebook that the absence of possibility of exchange of bodies and prisoners of war for 19 days now is extremely inhumane when military clashes do not stop.The Human Rights Defender of Armenia has been monitoring the situation closely, the investigations reveal that the huge number of military attacks against Artsakh and Armenia are indiscriminate and do not differentiate between military objects and civilian settlements, in many cases the attacks deliberately target the civilian population.

NKR Infocenter reported  that on October 15, at around 17:00, Azerbaijan again violated the ceasefire agreement for humanitarian purposes reached in Moscow and shelled Stepanakert. The target was the civil infrastructure. Fortunately, there have been no deaths or injuries.

The Miistry of Education, Science, Culture and Sports of the Republic of Armenia reported that children also suffer due to the war unleashed by Azerbaijan. Children's right to education is also seriously endangered. All educational institutions in Artsakh have been closed for an indefinite period since September 27. More than 24,000 children in the Artsakh Republic do not attend schools and do not have the opportunity to exercise their right to education. Due to the war, more than 10,815 children from 119 border communities in different regions of Armenia have been deprived of full-time education opportunities starting from September 27.  For security reasons, schools in these communities, as well as primary vocational and secondary vocational education institutions, have organized distance learning courses. Thousands of children in the same communities are unable to attend kindergarten.

International Committee of the Red Cross in Armenia  condemns  any targeting in the zone of Nagorno-Karabakh conflict, which lead to deaths or injuries of civilians.

A few hours ago NKR Infocenter reported that yet another violation of the humanitarian ceasefire was registered. The "Red market" community of Martuni region of Artsakh/NK was targeted. Azerbaijan fired rockets at the community with "Smerch" cluster bombs, according to preliminary data, there was one civilian casualty.

In total, the Azerbaijani aggression took the lives of 36 civilians in Armenia and Artsakh/NK, 3 of them were in the Republic of Armenia. There are more than 100 injured civilians.