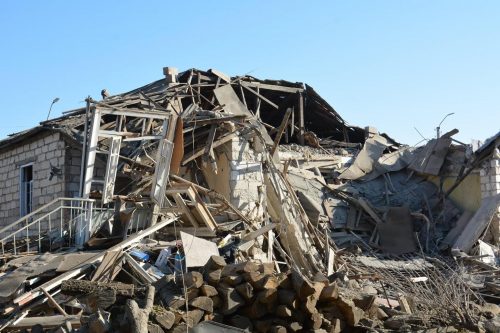 Artsakh/NK  Ombudsman reported that on the night of October 16-17, Azerbaijan continued to target the peaceful settlements of the Republic of Artsakh/Nagorno-Karabakh with heavy missiles and UAVs. Three civilians suffered in Stepanakert as a result of the missile and air strikes. Great material damage was caused to the civilian infrastructure and residential districts of the city.

According to the preliminary data, 3 civilians have been wounded in Shosh village of Askeran region. A great material damage was caused to the community. The details are being clarified.

The RA MoD spokesperson Shushan Stepanyan reported that on October 17, at dawn, once again violating the humanitarian truce, the hostile forces have resumed the rocket and artillery strikes at civilian settlements.
Especially intensive strikes were delivered against civilian infrastructures of Stepanakert and Shushi.

As the RA MoD representative Artsrun Hovhannisyan reported, Shushi and Stepanakert had been hit with more powerful means.