October 19. In the recent days, the Azerbaijani UAVs struck the schools of 2 villages in the RA Gegharkunik province. The schools were considerably damaged 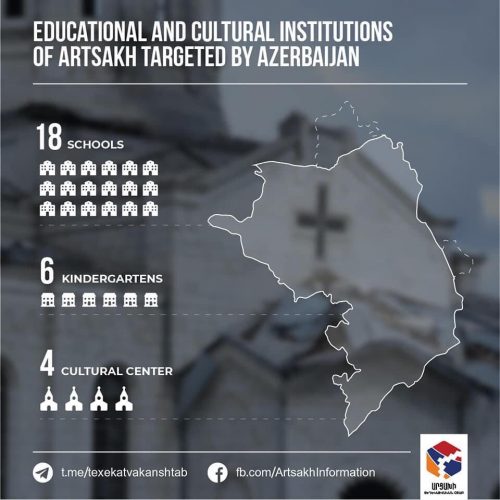 In parallel with the hostilities that took place on the night of October 18-19, Azerbaijan once again violated the agreement on a truce and fired in the direction of Artsakh/NK peaceful settlements, targeted civilian objects. In particular, rockets were launched on the Republic of Artsakh/NK Martuni town, as well as Urekan, Ishkhanadzor, Aygehovit and Vurgavan communities of Kashatakh region. Information on the casualties and damages is being clarified.

In the morning of October 19, the Azerbaijani armed forces again targeted Martakert town of the Republic of Artsakh/Nagorno-Karabakh and its nearby peaceful settlements, by launching rockets, in a relatively not intensive manner, on residential buildings, houses, public objects and roads.

The International Committee of the Red Cross in Armenia reports that their teams are trying to go to the field where they can to assess needs. Ongoing fighting makes this work difficult though. Where they have been able to get some sort of idea of numbers affected, they see the huge impact. In Nagorno-Karabakh, local structures speak of at least 75,000 people affected. In parallel, they are working to get a sense of the scale of impact in Armenia.

UNICEF appeals, in the strongest possible terms, for an immediate implementation of the humanitarian truce which both parties agreed to on 9 October. Children, families and the civilian facilities that they depend upon must be protected, in line with international human rights and humanitarian law. A complete cessation of hostilities is in the best interest of all children.

The RA Ministry of Education, Science, Culture and Sports reported that in the conditions of the aggression unleashed by Azerbaijan, as a result of the recent strikes by the Azerbaijani UAVs, secondary schools of Sotk and Kut communities of the RA Gegharkunik province were damaged. The waves caused by the strikes broke the windows of the educational institutions and their walls cracked. Fortunately, the administrative staff and other employees of the schools were not affected.

Steffen Kotre, MP of the opposition party “Alternative for Germany” of Germany’s Bundestag, reported on his Facebook page, “We were in Shushi and we saw that Azerbaijan targeted the church. Today, in Stepanakert, we saw with our own eyes that rockets had been launched on residential buildings, near which there were no military equipment or objects.  We have recorded that Azerbaijan, with the support of Turkey, attacked the civilian population of Artsakh, which is a great crime against the humanity. Sanctions should be imposed on Azerbaijan and Turkey in order to end this war soon”.