October 29. Throughout the day, Artsakh/NK towns were in the crosshairs of the Azerbaijani armed forces 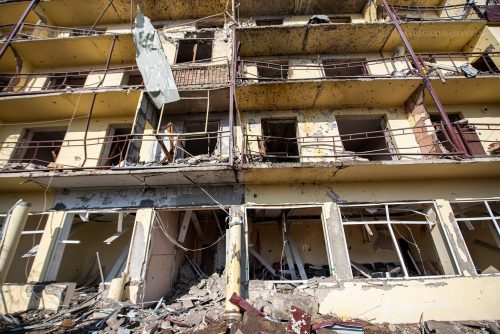 NKR Infocenter reported that on the night of October 29, Stepanakert was struck with rockets five times.

On October 29, Artsakh/NK Defense Army reported that Stepanakert, Shushi and Martakert were being rocketed by Smerch MLRS. Once again violating the requirements of the international humanitarian and customary laws, the adversary fired exclusively peaceful settlements, as a result of which there are civilians affected. The Azerbaijani military political leadership commits yet another war crime. Azerbaijan’s criminal leadership bears all the responsibility for further tension of the situation.

The Armenian Unified Infocenter reported that as a result of October 29 shelling, residential buildings were damaged and there are civilians affected in Shushi.

On October 29, the State Service of Emergency Situations of Artsakh/NK reported that Azerbaijan continually violates all the international conventions and uses banned weapons against the civilian population and Artsakh/NK residential settlements. Shushi once again appeared in the crosshairs of the Azerbaijani armed forces. This time, the building in front of the Holy Savior Cathedral of St. Ghazanchetsots was damaged. A rocket fell in the middle of the central road of the town. There are injured persons and great material damages.

Earlier, the service had reported that the enemy had deployed military aviation against the town of Martakert. Destructions were caused. There are no affected civilians. During the air-raid siren that lasted longer than an hour, the Azerbaijani forces struck Stepanakert with Smerch rockets. The air-raid siren was also on in Askeran, Martuni and Martakert.

At 8 in the morning, the air-raid siren was on in Stepanakert. At 08:03 the sound of the rocket striking the town was heard. The Azerbaijani forces used Smerch-type reactive rocket system on one of the suburban streets in the capital city. 1 residential house was damaged, the neighboring building completely collapsed and 1 car was damaged as a result of the strike. The house owner and the neighbor were injured and transported to a medical institution.

The RA Ministry of Foreign Affairs made a statement, “During the last three days, the peaceful settlements of Nagorno-Karabakh have been under continuous attacks with the use of various types of missiles, artillery and UAVs, as well as by the airforce bombings of Azerbaijan. Since the second half of October 28 till now Stepanakert, Shushi and Martakert have been under continuous attack. Stepanakert and Martakert are under the most intense bombing, which have resulted in heavy damages among civilian population and destruction of civilian infrastructure. Amid the pandemic, the hospitals and other healthcare infrastructures have been targeted. There are numerous casualties and wounded. The war crimes of the Azerbaijani regime against the civilian population are accompanied by the direct involvement of Turkey and the foreign terrorist fighters, and pursue the objective to annihilate the Armenian people of the Nagorno-Karabakh.

Despite the calls of the international community and the efforts of the OSCE Minsk Group Co-Chairs, Azerbaijan persistently rejects the implementation of the ceasefire agreements and the introduction of the verification mechanisms to maintain the ceasefire in the conflict zone. While pursuing its genocidal intent and evading the responsibility, Azerbaijan simultaneously launched a campaign based on falsification and fabrications to mislead the international community. Azerbaijan's policy of crimes against humanity and ethnic cleansing is doomed to failure and will encounter the resolute resistance of the people of Artsakh, which will be carried out through all the means necessary for self-defense”.

The spokesperson of the President of the RA/NK reported that military actions continue intensively in various directions of the frontline.

The Facebook page of the Embassy of Sweden in Yerevan reported that “In response to escalating humanitarian needs in Nagorno-Karabakh, Sweden has mobilized 20 million SEK to the International Committee of the Red Cross (ICRC) through the Swedish International Development Cooperation Agency (Sida) Sida - Styrelsen för Internationellt Utvecklingssamarbete. The funds will be used to assist those most severely affected by the war. We urge all parties to facilitate for ICRC to carry out its mandate. Respect for International Humanitarian Law is a must to protect civilians. Sweden continues to call for an immediate ceasefire and negotiations for a peaceful solution under the auspices of the Organization for Security and Cooperation in Europe (OSCE) Minsk Group Co-chairs”.

Stéphane Dujarric, official representative of UN secretary General, stated that the UN strictly condemns attacks and bombings of peaceful settlements during the NK conflict. “We again reiterate the secretary-general's call on the parties to immediately implement the humanitarian ceasefire that the parties have committed to and fully abide by their obligations to spare and protect civilians and civilian infrastructure”, said the spokesman.

The RA Ministry of Health made a statement on the Azerbaijani attack on the maternity hospital in Stepanakert.

The Minister of Health Arsen Torosyan had a video conversation with WHO Regional Director for Europe Hans Kluge. Arsen Torosyan presented H.Kluge details on the coronavirus situation and the situation caused by the military actions unleashed by Azerbaijan.

“All this is happening amid the difficult situation of the pandemic and the world public health society will not manage to protect vulnerable groups of the population against the destructive consequences of the virus”, said the Minister.

Yeghishe Kirakosyan, Representative of the Republic of Armenia before the European Court of Human Rights, reported that the ECtHR upheld the appeal for an urgent measure in the frame of the case of 3 Armenian POWs and inquired information from Azerbaijan regarding the 3 Armenian POWs that could be seen in the video material disseminated on Azerbaijani media. The Court claimed information on their place, the conditions in which they are held and medical service provided to them, giving the Azerbaijani Government a deadline of November 3.

The European Union finds it unacceptable that after three agreements brokered by Russia, France and the United States on a ceasefire, the fighting in and around Nagorno-Karabakh still continues and there are more and more reports of civilians being targeted. The European Union reminds the sides to the conflict of their obligations to protect civilian lives under international humanitarian law. The European Union urges the sides to engage in substantive negotiations on a peaceful settlement of the Nagorno-Karabakh conflict without delay, as last agreed in Washington on 25 October.

The ICRC today has facilitated the handover of bodies of combatants killed in action during the recent escalation of the Nagorno-Karabakh conflict. The remains were transferred across the international border from Azerbaijan to Armenia. In addition, the agreement included the transfer of two civilians held in relation to the conflict. With assistance from the ICRC, an elderly woman was transferred from Azerbaijan to Armenia via Georgia yesterday. A second civilian, an elderly man, was deemed unfit to travel for the time being.