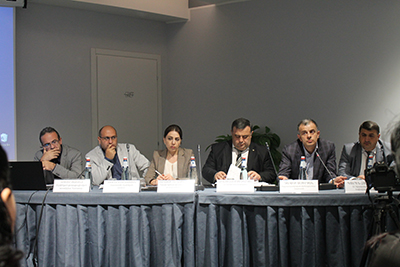 Representatives of the RA Police, RA Ministry of Justice and civil society organizations took part in the discussion.

Davit Amiryan, deputy Director for Programs of Open Society Foundations-Armenia, opened the discussion and firstly expressed his condolences to the relatives and colleagues of the policeman who was killed last week in Yerevan while conducting his service duties. Davit Amiryan noted, “Such tragic incidents connected with a policeman, the one securing public order, give cause for concern to think over what radical changes are necessary to exclude such actions in the future”. He stressed that civil society is always ready to support the Police by transferring their knowledge and experience. The foundation’s representative reminded that in the early 2000s, Open Society Foundations-Armenia was part of the agenda of police reforms development. “After the revolution, we can see a change in the public perception of Police, and this creates a fertile soil for the joint work of the Police and civil society”, Davit Amiryan mentioned. In his words, civil society perceived police reforms on a larger scale, i.e. in the context of constitutional reforms, the implementation of which would give the Police a new status and new opportunities.

Deputy Chief of Police Hovhannes Kocharyan presented 2020-2023 programs of system reforms. In his words, the latest tragic incident obliges the Police to present a reform program as soon as possible, a program that will increase public trust in the Police. Kocharyan agreed with the viewpoint that after the revolution, public attitude towards the Police changed and also noted that this change is attributed to public trust in the political authority.

He confessed that since the independence of Armenia, no systemic reforms had been implemented in Armenia. In Hovhannes Kocharyan’s words, the situation has now changed, and there is not only financial, but also psychological and moral support by both the state and partner organizations.

“After the separation of the investigative committee, the Police ceased to be the body conducting comprehensive and objective investigation into crimes. This condition calls for the legislation to give the Police a concrete position by specifying police issues in legislation”, said Kocharyan.

In his words, the proposed changes will make the police a responsive, mobile and professional body discovering, preventing and disrupting crimes.The new changes also recommend to include protection of witnesses in the main functions of the Police and a new professional service will soon be put in place to implement this function. “The General Department of State Protection will soon cease providing contract services to private companies and will exclusively engage in protection of objects of strategic importance and protection of witnesses”, Police deputy chief mentioned.

Reforms will also address demilitarization of the Police. According to Kocharyan, issues of police troops’ services need reviewing. The reform program recommends reorganizing Police troops into Police Guard which will help secure public order, be involved in actions to ensure citizens’ security, and if necessary, take part in neutralizing disaster consequences and protection of the country.

Kocharyan mentioned that given the crime growth trends, the way Police act should change. They should be a body not only simply responding to,but also preventing crimes. “In this regard, two changes are recommended, one is for the Police to have a 24-hour patrol service on the whole territory of the Republic of Armenia and the other is to give the Police the power to develop crime prevention national programs. Those programs must have measurable indicators”, the Police deputy chief mentioned.

Helsinki Citizens’ Assembly-Vanadzor Chairman Artur Sakunts noted that the latest incident of the murder of a policeman gives rise to questions on the preparedness of policemen. The human rights defender presented data of sociological surveys and studies on the activity of law enforcement bodies during 2015-2019 that evidenced that public trust in the police system increased after the revolution. “Any concept related to the system of law enforcement must address one important issue: what kind of police do we imagine, what is the model of the police that we want to see in democratic Armenia governed by the rule of law? What system of values must this structure be formed on?”, Artur Sakunts mentioned.  He believes that the Police should indeed be guided by absolute respect towards human rights and dignity, and have exceptional political neutrality. He also spoke about Police accountability and noted that the National Assembly oversight over Police must be ensured as a guarantee of political independence from the executive. The human rights defender found policemen’s social security issue to be of cornerstone importance and stated that relevant attention must be paid to this issue in the frame of the reforms.

“Protection of Rights Without Borders” NGO President Haykuhi Harutyunyan finds that in the new document of police reforms, the formulations related to human rights protection are general. “In the new document, I would like to see rights-based changes that would ensure that each policeman realizes the foremost value of a person’s rights”, Haykuhi Harutyunyan mentioned. She reminded about regular violations of the right to liberty and security made by the police when apprehending individuals during peaceful assemblies, as well as acts of physical and psychological violence against individuals in police cars and departments. According to the human rights defender, the reform program does not offer anything in terms of excluding those human rights violations.

Women’s Support Center Director Maro Matosyan spoke about insufficient actions of the police in terms of preventing domestic violence acts. In her words, despite the adoption of the law on domestic violence, police representatives continue to be guided by certain prejudice and stereotypes.

Armenian Helsinki Committee representative, advocate Robert Revazyan spoke about the public perception of police. To eradicate public stereotypes related to the policeman’s profession, Revazyan noted that it is important that objective investigation be conducted into each case of torture by police. He mentioned that in different times, police took illegal actions against participants of peaceful assemblies and violated their right to peaceful assemblies, and yet policemen were not held liable for any of these cases.

After the 2018 parliamentary elections, this is the third public discussion  organized by the Partnership for Open Society Initiative on systemic problems of post revolutionary Armenia. Discussions of this format organized by Partnership for Open Society Initiative will be continual and will address systemic problems of various spheres.