Conscripts and servicemen should be informed about their rights: Helsinki Citizens’ Assembly-Vanadzor continues legal awareness-raising campaign 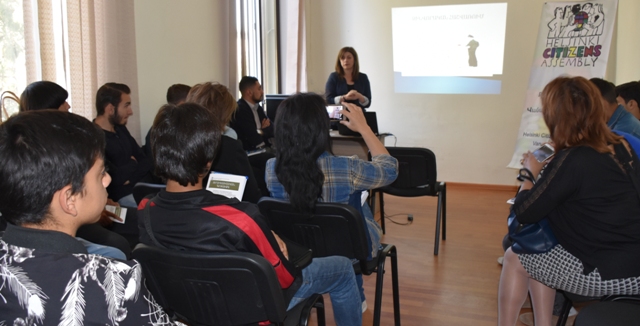 On October 16, 2019, in Armavir region and on October 19, 2019, in Yerevan, Helsinki Citizens’ Assembly-Vanadzor conducted regular information trainings on the awareness-raising and protection of the rights of servicemen and conscripts. The trainings were held by Armine Sadikyan, coordinator of the Organization’s peace-building projects, and Hayk Hakobyan, one of the Organization’s jurists.

The main interest was to get information on their rights and obligations during the pre-conscription, conscription and military service periods. During the training-consultations, certain questions regarding military enlistment, notification, medical examinations, proper medical examination were addressed, they were informed how and where to turn to in case of being conscripted with health problems, how to restore the violated rights and what appeal mechanisms exist.

The training participants also received detailed information on the rights of pre-conscripts, conscripts and servicemen during the medical examination, when and what periods of time are provided to servicemen as vacations, law provisions concerning citizens who did not complete compulsory military service through violation of the existing procedure.

“In all the regions, people come with the same problems. Our aim is to raise the level of awareness on their rights among persons subject to military enlistment, conscripts, servicemen, their parents and relatives, also to introduce the recent legislative changes”, says Armine Sadikyan, Coordinator of Peacebuilding Projects at HCA Vanadzor. Around 40 citizens who participated in the 2 trainings received legal-medical consultations. The trainers mentioned that if the citizens did not agree with the decision on their fitness for military service, the Organization’s jurist could be involved in the appeal and later also in the judicial protection procedure, if necessary.

Ahead of winter conscription, during October-December 2019, Helsinki Citizens’ Assembly Vanadzor will continue the series of legal-informative trainings for persons subject to military enlistment in the RA, conscripts, servicemen and their family members.

Awareness-raising campaign that was launched in 2018 will continue until May 2020. Trainings will be held in Shirak, Aragatsotn, Kotayk, Syunik and Vayots Dzor regions. Information on the date and place of the trainings to be held in the regions will be provided separately.

To participate in the trainings, as well as to receive legal consultation and legal support, you can register in advance by sending an email to asadikyan@hcav.am,  sgalstyan@hcav.am emails or phoning 0322 4 22 68, 094 042268. Transportation costs will be reimbursed.

Information on previous trainings can be found HERE