November 13. After the war unleashed by Azerbaijan against Artsakh/NK stopped, the process of exchanging the bodies of those killed has commenced 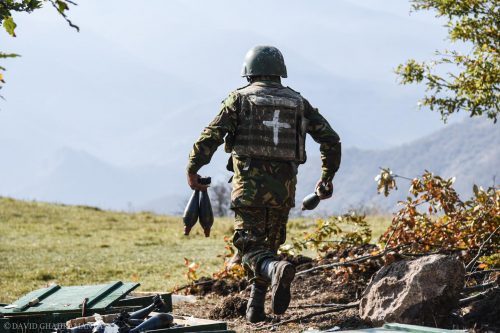 The Republic of Artsakh/Nagorno-Karabakh President Arayik Harutyunyan reported on his Facebook page that on November 13, exchange of bodies of those killed in action has commenced. The exchange is conducted under the coordination of the Russian Federation peacekeeping contingent, with the involvement of the International Committee of the Red Cross (ICRC) and Artsakh Republic State Service of Emergency Situations.

It should be mentioned that as the previous three agreements on truce were not observed, the Red Cross has not had an opportunity to implement humanitarian operations. Despite the fact that international organizations also called for observance of the truce. The RA Ministry of Environment also alerted about the situation caused by the impossibility to exchange corpses.

In a letter dated 11 November 2020, the Republic of Armenia addressed the Republic of Azerbaijan and called on Azerbaijan to cease its discriminatory practices and other continuous violations with regard to Armenia and ethnic Armenians. It is mentioned on the RA MFA webpage that should the Government of Azerbaijan reject Armenia’s invitation or fail to respond to it within the fixed timeframe, Armenia reserves its right to seek to settle this legal dispute in accordance with the procedure set forth in 1965 International Convention on the Elimination of All Forms of Racial Discrimination.

The RA Human Rights Defender summed up all the war crimes committed by Azerbaijan throughout the war and noted  that torture and cruelties were implemented against our compatriots solely because they are ethnic Armenians. Moreover, they did all this with exceptional cynism and terrorist methods, by gross violations of the right to life, the right to health, the right to dignified treatment, the right to property and many other rights.

Throughout the whole war, the RA Human Rights Defender alerted about this and the humanitarian disaster ongoing in the Republic of Artsakh/NK.

Furthermore, the RA Minister of Health, as well as the international community alerted about the humanitarian crisis caused by the spread of COVID-19.

During the previous days, too, the Republic of Artsakh/NK Human Rights Defender published reports on various human rights violations in Artsakh/NK by the Azerbaijani armed forces during the war.

Earlier, the RA Ministry of Education, Science and Sports alerted about the violation of children’s rights  to education. The Child Protection Network also made a statement on the issue. The Republic of Armenia published an ad hoc report on Azerbaijani military attacks against the civilian population of Davit Bek and Agarak villages of Syunik province of Armenia.

They also made publications on degrading treatment, violence and torture against prisoners of war and civilians by the Azerbaijani side.

On November 7, Ombudsmen of Armenia and Artsak/NK published a joint report on use of weapons of mass destruction by Azerbaijan in Artsakh/NK.

It was also reported that the Azerbaijani side illegally seized the passwords of the Armenian war prisoners’ social networks and started to manage those pages.

It should be mentioned that according to the data disseminated by the Armenian Unified Infocenter, throughout the whole war, as a result of the Azerbaijani aggression overall 53 civilians were killed in Armenia and Artsakh/NK, around 20,000 property-buildings and buildings were damaged.

War crimes by the Azerbaijani side were manifested in targeting Artsakh/NK’s and Armenia’s civilian population, as well as international media representative journalists working on the site.

International human rights organizations and media representatives also reported the use of banned weapons against Artsakh/NK peaceful population. RA/NK capital city Stepanakert’s medical center, where civilians were getting treatment, also appeared in the target of the Azerbaijani armed forces. Besides, the maternity hospital was also targeted.

The reputable Genocide Watch, engaged in assessing the threat of genocide in the world,  ranked Azerbaijan at stage 9 for Extermination and stage 10 for Denial.

During the first days of the war, the Armenian side stated about the involvement of mercenaries by Turkey’s support and immediate participation. Later, that fact was recorded by the RF, France, international organizations and media.

Azerbaijan also used incendiary weapon containing white phosphorus against Artsakh/NK. More than 2000hectares of forest and vegetated territory were destroyed in the Republic of Armenia and Artsakh/NK as a result of the weapon containing chemical elements, as well as other weapons. The Minister of Environment addressed a letter to the Executive Secretaries of Environmental Conventions, international organizations and partners to draw their attention to the issue.

We touched upon the cases of targeting civilian population by the Azerbaijani armed forces in a more detailed way in our daily summaries and statements.