HCA Vanadzor was founded in 1998 as a branch of Helsinki Citizens' Assembly Armenian Committee.  It was registered as an independent organization in 2001 and was re-registered in 2005 at the Ministry of Justice. The Headquarters of the organization is in Vanadzor – Lori Regional Center. HCA Vanadzor has representative office in Yerevan. The geographical scope of the organization's activity covers both the Lori Region and the entire territory of the Republic of Armenia.

The main areas of the organizations’ activities are Human Rights, Advocacy and Peace building. During the implementation of its activities, HCA Vanadzor adheres to the necessity for the localization and protection of International Documents and norms on Human Rights ratified by Armenia.

Political situation changes in the Republic of Armenia after April 2018

On 23 April, following a one-month period of non-violent, peaceful and decentralized civil disobedience and large-scale protests, Serzh Sargsyan had to resign.

Before the end of his second term of office, on Serzh Sargsyan’s initiative, Armenia’s form of government had changed from a semi-presidential system to a parliamentary one through a referendum. The constitutional amendment process was, however, not participatory. The draft amendments were published only three months before the referendum, leaving insufficient time for debate, while the referendum took place with numerous violations, including the falsification of results.

Over the last 20 years, Armenia experienced obvious regression in the fields of democracy and human rights even after joining the Council of Europe in January 2001, legislative amendments were made, including the constitutional amendments made in 2005 and 2015. Elections at the national and local levels were neither free nor fair. People were persecuted for their political views, political opposition activity and civil actions. The freedom of speech and pluralism were restricted. Journalists were subjected to violence when doing their jobs. Torture was of a continuous nature in police stations, penitentiary institutions and the armed forces. Human rights violations were of a sustained and systemic nature. Officials and representatives of law enforcement agencies were not brought to liability for these violations, as no effective investigations were conducted.

One should note the scope of the spread of corruption, which international and local experts assessed as a threat to national security. The principles of equality before the law and the rule of law no longer worked in Armenia; impunity dominated. The judiciary was fully subject to executive power, and justice was selective in nature. The participatory process in the field of government was an imitation only of real democracy. Due to the authorities having monopolised the economy, political parties, being deprived of a social base, had become a constituent part of the political system ruled by the Republican Party.

Civil society and its institutions, working on issues such as fundamental human rights, the fight against

corruption and the freedoms of assembly and expression, were able to develop their capacities and skills in the fields of documenting and publicising human rights violations, corruption and economic crimes, carrying out strategic litigation, advocacy and monitoring the performance of international obligations by the authorities. Short- term civil protests and long-term social movements mobilised in connection with various issues, including environmental issues, such as initiatives against the exploitation of the copper mine in Teghut and the construction of a hydroelectric power station at the top of Trchkan Waterfall; issues related to human rights violations in the armed forces, including initiatives known as the Army in Reality and Women in Black, Armenia, and in penitentiary institutions; and issues related to human rights violations against women – including domestic violence – and LGBT people, to name but a few.

From election to election, civil society organizations performed observation missions more and more professionally. The data obtained and the reports compiled enjoyed the attention of international observer missions and were perceived by them as unbiased, objective and well-grounded in data. Within civil society, cooperation between different institutions developed through unions, coalitions, joint monitoring and reports. Civil society was active on international platforms as well, including those offered by the United Nations (UN), Council of Europe, Organization for Security and Co-operation in Europe (OSCE) and European Union (EU), by presenting shadow reports and statements, and submitting applications to the European Court of Human Rights and human rights institutions of the UN, including the Committee against Torture and Human Rights Committee.

The activity of civil society institutes was targeted by the authorities and media as instructed by the former. They represented those institutes as foreign agents, grant-eaters, traitors, anti-national elements, and this representation was manifested not only in words but also by threats, criminal prosecutions and imprisonment, albeit short-term. This means that the authorities did not welcome the activity of civil society. The authorities made consistent efforts to maintain control over civil society or as a counterbalance, fake non-governmental organizations (GONGOs) were established in an effort to reduce the role and impact of independent NGOs, cast doubt on the objectiveness of their assessments by fake observers, lawyers and human rights defenders. As a result, a barrier sometimes emerged between non-governmental organizations and civil initiatives.

It should be noted that civil society has expressed its stance with regard to every nationwide event, every blatant human rights violation through announcements, public discussions, reports, initiations of court proceedings. Through the efforts of civil society institutes, the seeming immunity of state institutes was abolished from public perceptions. For example, the Ministry of Defense, which was, for a long time, considered an inscrutable, inviolable body, especially in the context of Karabagh conflict, was obliged to come out of the entirely closed regime situation and take public opinion into consideration due to public complaints, initiatives claiming institution of criminal proceedings on death cases in the armed forces, additional data obtained through judicial protection and especially under the pressure of presenting all this in international instances.

As mentioned above, the participation of civil society institutes in the decisions made by the authorities was of formal nature. Nevertheless, even in the condition of that negligent attitude, civil society used the limited platforms of dialogue to present their stance and to make public aware, at the same time showing, in each case, the conscious inaction or corrupt interest of the government.

OSCE Civic Solidarity Platform, EU Eastern Partnership Civil Society Forums, protection mechanisms of human rights defenders had an important role for the activity of Armenian civil society. It should be mentioned that the attitude of international structures towards the assessments made by Armenian civil society institutes did not always have a desirable nature. International structures often treated the assessments, information or reports by civil society based on the agreements with the current authorities or political expediency. Of course, international human rights organizations such as Human Rights Watch, Amnesty International, Transparency International, Freedom House and others were an exception and often the only means to present the situation of human rights in the RA on international platforms.

Thus, the Velvet Revolution was preceded by the active work of civil society and numerous civil initiatives in unfavourable conditions. Despite being subjected to, to put it mildly, the disobliging attitude of the authorities, civil society still managed to present objective information to the public along with examples of fight and cooperation and opportunities for change. Through continuously involving society in its activity and through educational programmes, civil society contributed to raising the awareness of society and encouraging a demanding stance. It is noteworthy that active figures in CSOs and citizens who have a connection with those organisations and their initiatives were at the forefront of the 2018 people’s movement.

For years, human rights institutions also provided institutional support for the civil fight going on in Armenia by defending citizens involved in that fight in police stations and judicial cases and providing legal help in other cases. In April, that support was more coordinated: through a joint hotline, a number of human rights organisations provided legal advice to the movement’s participants and carried out rapid response activities.

After the Velvet Revolution, a wide field of activity has been created for civil society to realise the suggestions made over the years and act to improve the human rights situation in different spheres in Armenia, to protect rights, increase the level of accountability of the authorities and the transparency of their actions, and decrease corruption risks. We are, therefore, in the process of learning how to live and act in free conditions.

On individual level HCA Vanadzor provides free of charge legal assistance to citizens on a range of issues and in cases of violation of their human rights, HCA Vanadzor assists them by representing them in court or assisting them with preparing and submitting official inquiries, crime reports, court applications, and appeals. We do not only receive citizens in our office but also visit them at their location (be that home, detention facility, prison, or other institution) and provide legal consulting via hotline available in the territory of Armenia. Every year, HCA Vanadzor provides legal consulting and assistance to approximately one thousand people. HCA Vanadzor represents about 50 people from socially vulnerable groups in court annually. The Organization also conducts about 30 cases of strategic significance annually. The strategic cases are selected based on their potential impact on legislation and practice in human rights protection.

HCA Vanadzor conducts monitoring and data collection (through visits, official inquiries, surveys, mass media and other sources) to assess the human rights situation in closed and semi-closed institutions, courts, national and local governmental entities. HCA Vanadzor also observes local and national elections, monitors government expenditures and implementation of State Programs in target areas, which include, but are not limited to reforms in the RA Police, judiciaries, provision of medical and other assistance to people with disabilities and so on.

The data received through legal consulting and monitoring, along with legislative analysis are used for developing reports and recommendations on legal regulations and practice.

Who we work with

The Organization prepares and presents shadow reports on implementation of the RA international obligations in partnership with other human rights organizations.

HCA Vanadzor is committed to the rights protection of the following target groups:

The target audience for activities, reports, initiatives, and recommendations by HCA Vanadzor are the following entities, which have a direct or indirect influence on decision-making

I. Intergovernmental and international agencies

I. Society in general

Contribute to the protection of human rights and restoration of the violated rights.

Ensure legal support to the representatives of target groups.

Improve the methods and mechanisms used by the Organization to restore violated human rights.

Contribute to the reform of human rights protection policy, efficiency of the mechanisms and development of civil oversight in the RA.

Assess the implementation of state projects in target areas.

Assess RA international human rights commitments as a UN, Council of Europe and OSCE member state and promote their fulfillment.

Promote changes in the legislation and law enforcement practices to resolve identified issues.

Assist in development and improvement of the human rights monitoring institute.

Contribute to the dissemination of the concept of human rights, raising legal awareness, widening human rights protection and peace-building movement in the RA and in the region.

Cooperate with active citizens and human rights organizations at national and international levels.

Initiate and support peace-building initiatives in the region and promote development of mutual trust and dialogue between isolated societies.

Develop and update the Organization’s management mechanisms and infrastructural framework.

Ensure and continuously develop professional and additional capacities of the staff while carrying out the Organization’s activities.

Based on the specific professional and working conditions, ensure additional measures of safety and healthcare for the employees. 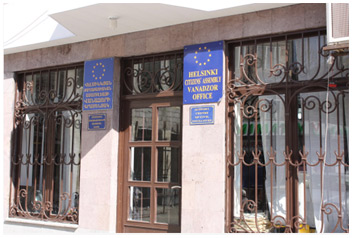