November 1. Cultural and educational objects of Shushi were also in the crosshairs of the Azerbaijani armed forces 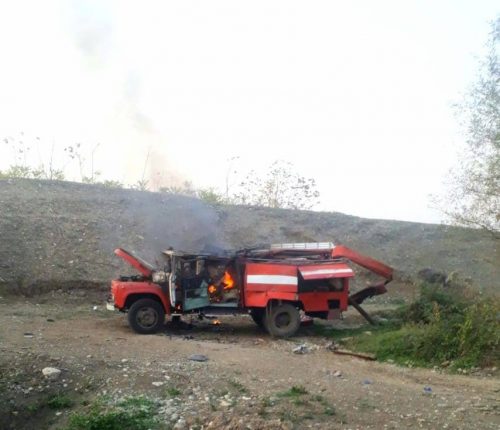 State Service of Emergency Situations of the Republic of Artsakh/Nagorno Karabakh reported that the night of October 31-November 1 was tense in Artsakh/NK town of Martuni and its adjacent settlements. Combat aviation was used over the town, the bombardment caused numerous demolitions. The Azerbaijani armed forces resumed atrocities against Martuni at dawn. The villages of the upper subdistrict of Askeran of the RA/NK were also shelled during the night. The Azerbaijani armed forces fired at Avetaranots and Szneq communities from “Grad” and “Smerch” MRL systems. There are no affected civilians reported. The scope of material damage is being clarified.

The RA/NK Defense Army reported that during the night, in parallel with the hostilities, the Azerbaijani armed forces continued targeting peaceful settlements, particularly by launching artillery and missile strikes on RA/NK Martuni and Shushi towns, as well as Karin Tak village. The Azerbaijani armed forces attempted to advance with about 10 units of equipment in the Avetaranots - Sghnakh section, but suffered heavy losses and were repulsed.

The Armenian Unified Infocenter reported that last night the Azerbaijani armed forces tried to attack along the entire frontline. The attempts were especially intense in the directions of Martuni and Shushi.

The Armenian Unified Infocenter reported that Azerbaijan continued to fire on civilian settlements throughout November 1. The city of Martuni and its neighboring villages were subjected to aerial bombing. There were no casualties, the scope of damage caused by the destructions is still being assessed. At noon, Azerbaijani forces carried out rocket attacks on Shushi, mainly from Grad and Smerch launchers. Many structures in the city were ruined, the Persian Gohar Agha mosque was partly damaged. Combat aviation was also used in an attack on Martakert. The town was once again bombed, there were no civilian casualties in the attack. Explosions were heard in Stepanakert as well, with no casualties. The air raid siren was heard 7 times in the capital city alone.

The RA/NK State Service of Emergency Situations reported that in Artsakh settlements the situation was relatively calm. Azerbaijan regularly fired in the direction of Martuni alone from various weapons. Civilians were not affected by the firings in Stepanakert.

State Service of Emergency Situations of the Republic of Artsakh/Nagorno Karabakh reported that the Azerbaijani armed forces continue targeting not only civilian settlements and civilians, but they once again targeted Artsakh/NK State Service of Emergency Situationa. Askeran regional emergency situations department firefighter car was rocket-struck.  Rescue workers were on their way to bring water to the civilians of the region for humanitarian purposes. A UAV launched 1 rocket directly on the firefighter car and burned it. Fortunately, the staff did not suffer. It was also mentioned that since the very first days of the war the Azerbaijani armed forces have also targeted rescue workers carrying out humanitarian mission.

On November 1, the RA Human Rights Defender Arman Tatoyan had a working meeting with One Free World International human rights organization founder Majed el-Shafie and member of the Icelandic Parliament Birgir Thorarinsson. The Human Rights Defender mentioned, “Targeting and using banned weapons against civilians, involvement of mercenary terrorists, Armenophobia  and the Azerbaijani armed forces’ atrocities and inhuman treatment evidence that they have an objective to make ethnic cleansing in Artsakh by terroristic methods”. During the meeting, Arman Tatoyan presented facts on atrocities and crimes by the Azerbaijani armed forces against civilians, including the use of banned weapons, targeting civilians and destructions of infrastructure. The meeting participants highlighted the importance of cooperation in the sphere of human rights protection and made new agreements on cooperation.

Photo: A UAV launched 1 rocket directly on the firefighter car and burned it