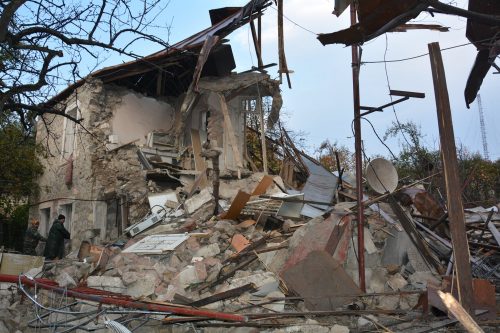 The Armenian Unified Infocenter reported that Stepanakert, capital of the Republic of Artsakh/Nagorno Karabakh, was fired from Grad and Smerch MRL systems. Earlier, it was reported that fortress city Shushi was rocket-struck.

The RA Government official Facebook page posted a video stating that Azerbaijan is using prohibited weapons containing white phosphorus. The Ministry of Environment and 50 NGOs have applied to international organisations.

NKR Infocenter reported that the situation remains tense in Martuni. Throughout the night and in the morning, artillery and rocket strikes continued. Despite the dangerous situation, the competent bodies are doing restoration work, often appearing in the enemy’s target.


The Republic of Armenia and Republic of Artsakh  Human Rights Defenders published a joint report on the use of incendiary ammunition of mass destruction containing chemical elements (possibly white phosphorus) by the Azerbaijani armed forces against Artsakh (Nagorno-Karabakh).

To date, as a result of the Azerbaijani aggression, overall 53 civilians have been killed in Armenia and Artsakh/NK.