“Ilham Aliyev confirms the absence of any justification of deliberate targeting of the civilian population and civilian infrastructure”, Spokesperson of Ministry of Foreign Affairs of Armenia responded to Aliyev’s interview to the BBC News Agency 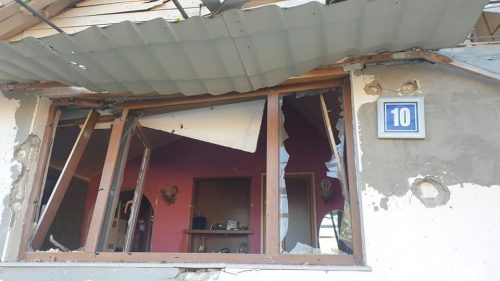 The Armenian Unified Infocenter reported that during November 8 and early morning of November 8, the Azerbaijani armed forces  continued its aviation, as well as artillery and missile strikes on peaceful settlements of the Republic of Artsakh/NK. It was also reported that except Stepanakert, the night was relatively calm in other civilian settlements. After midnight, the adversary launched several cluster rockets at Stepanakert, damaging civilian infrastructure. There were no casualties in the capital. The night was relatively calm in other settlements of Artsakh/NK.

NKR Infocenter reported the the Azerbaijani-Turkish armed forces continue war crimes by firing against Artsakh/NK peaceful settlements and population. Long-range missiles are being launched on Stepanakert. The target is multi-apartment buildings, residential districts, objects of public and economic importance. There is no military object in these areas.

Spokesperson of Ministry of Foreign Affairs of Armenia commented on the statements made by President of Azerbaijan Ilham Aliyev in the interview to the BBC News Agency. He said that in this interview Ilham Aliyev confirms the absence of any justification of deliberate targeting of the civilian population and civilian infrastructure of Stepanakert and other peaceful settlements in Artsakh, which have been documented by many eminent international media outlets and human rights watchdogs. Realizing that sooner or later he will bear the responsibility for the war crimes he has committed, Ilham Aliyev made a desperate attempt to deny the truth, by labelling it “fake news. This statement by Ilham Aliyev full of hatred, voiced out amid the continuous targeting of the civilian infrastructure of Artsakh by the Azerbaijani armed forces under his command, once again proves that under no circumstances the people of Artsakh can be put within Azerbaijan’s jurisdiction.

The EU has allocated an additional €400,000 in humanitarian aid to cover the most urgent needs of civilians affected by the conflict in and around Nagorno Karabakh.

Commissioner for Crisis Management Janez Lenarčič: “The EU calls for an immediate end to the hostilities that have already claimed civilian lives. We are extremely concerned about the deterioration of the humanitarian situation, given the upcoming cold season and the aggravating coronavirus pandemic.”

Artsakh/NK Human Rights Defender prepared the third Report on Azerbaijani Atrocities Against Armenian Servicemen and Prisoners of War. The third report presents the facts, collected by the staff of the Human Rights Defenders of Artsakh/NK and Armenia from October 26 to November 3, on the war crimes committed by the Azerbaijani armed forces against Armenian prisoners of war and dead bodies of Armenian soldiers.

During the meeting with the delegation led by Caroline Cox, Baroness of Great Britain, the RA Human Rights Defender said, “Azerbaijan’s aim to make ethnic cleansing of Armenians in Artsakh is evidenced by concrete proofs”. Arman Tatoyan made a detailed presentation of killings of civilians and damages caused to them, as well as material damage caused to villages in RA Gegharkunik and Syunik provinces by the Azerbaijani armed forces.

To date, the Azerbaijani aggression claimed the lives of overall 53 civilians in the Armenian side.