October 27. Azerbaijan kept peaceful settlements of the Republic of Artsakh/NK under fire 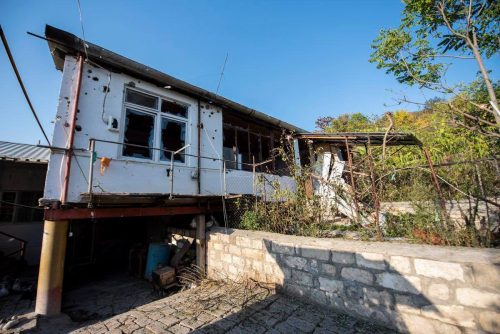 The State Service of Emergency Situations of Artsakh reported that on October 26, the Azerbaijani armed forces targeted the upper subregion of Askeran in the Republic of Artsakh/NK, namely, Avetaranots, Madatashen, Sghnakh and Moshkhmhat villages. A UAV was spotted in the sky in Stepanakert.

NKR Infocenter reported that during the night, the Azerbaijani armed forces continued shelling peaceful residential settlements, in particular, RA/NK’s Martuni, Martakert town and villages of the upper subregion of Askeran region were the target.

On October 27, the State Service of Emergency Situations of Artsakh reported that Azerbaijan held under fire peaceful settlements of Artsakh. There are people injured.

In the afternoon, the city of Berdzor of the Kashatagh region was shelled by the enemy artillery, causing major destructions. In the second half of the day, the city of Martuni of RA/NK was bombarded by the enemy military aviation. Civilian infrastructures, public and economic facilities were struck. There are no casualties. Significant material damage was inflicted here.

The village of Nngi in Martuni region was fired at by “Smerch” multiple launch rocket system. As a result of cluster bombing, three women were injured. One house was completely destroyed, and other houses and infrastructure in the community were damaged to varying degrees.

Ombudsman of Artsakh/NK reported that his staff used the results of the fact-collection mission and updated the data concerning the consequences of Azerbaijani crimes against Artsakh’s civilian population since September 27. Till October 26 included, as a result of Azerbaijan’s side targeting civilian residential settlements, 39 civilians of RA/NK have been killed, 1 of whom was a little girl, 7 were women and 31 were men. Overall, 122 persons got body injuries, 102 of whom got serious injuries. 83 of the aforementioned are male citizens and 19 are female citizens. A great material damage was caused to 150 residential areas of the Republic of Artsakh/Nagorno-Karabakh, in particular, 11.600 private real estate, 1.600 private movable properties, 2.100 infrastructure, objects of public and industrial importance were damaged.

The Ombudsman prepared the second report on the inhuman treatment of Armenian prisoners of war and corpses by the Azerbaijani armed forces and sent it to the respective international organizations.

The second report contains the facts of various violations committed by the Azerbaijani armed forces against the dead bodies of Armenian soldiers and prisoners of war recorded by the offices of the Ombudsmen of Artsak/NK and Armenia on October 16-25. The analysis of the facts shows that the inhuman treatment of the dead bodies of Armenian soldiers and POWs, and the publication of its manifestations is a widespread and encouraged behavior in the Azerbaijani armed forces. This behavior largely stems from the policy of Armenophobia pursued at the state level in Azerbaijan for many years.

Considering that the evidence for such cases is more than sufficient - some of which have been published by reputable international media and organizations - as well as the persistent and systematic nature of these gross violations, the Human Rights Ombudsman emphasizes the international community's obligation to properly respond to such cases and prevent further possible crimes with its practical leverage.

Earlier, the Human Rights Defender of the Republic of Artsakh/NK, noticing the speculations on social networks about some photos involving children, and stressing the importance of protecting the rights of children, conducted research on the origin and content of those photos. It should be noted that international law prohibits the participation of children under the age of 15 in hostilities; moreover, the relevant person was not directly involved in military operations. The Human Rights Defender, highlighting the proper protection of children's rights during hostilities, emphasizes that to date there have been no cases of children’s involvement in hostilities. However, the Ombudsman urges everyone to be careful in the matter of children under the age of 15 handling weapons.

The Republic of Armenia Human Rights Defender Arman Tatoyan reported that a large number of videos and photos about the war crimes and atrocities are sent to Armenian social network pages and private users from Azerbaijani social media sources, simultaneously spreading hatred against ethnic Armenians. The alarming complaints sent to the Human Rights Defender of Armenia and their daily monitoring show that the mentioned videos and photos are sent in the form of separate/private messages, and are accompanied by exceptional cynicism and threats. Moreover, the monitoring of social networks shows that Azerbaijani or Turkish accounts or pages are opened or activated with the specific purpose of distributing the videos and photos that show the killed soldiers or the process of the killing itself which is accompanied by atrocities. At the same time, the inspections show that not all the materials of the atrocities contain servicemen of the Republic of Artsakh/NK or Republic of Armenia armed forces, however, they are presented with distorted and false information in such a way that it refers to the atrocities committed against members of the Artsakh Defense Forces by the members of the Azerbaijani Armed Forces and refers to the hostilities that started on September 27th. These videos are edited and processed, which evidences that they have undergone professional preparatory work, and this work has an organized and coordinated nature. One of the salient features of the pages or accounts of the above-mentioned Azerbaijani social networks is that they are often prepared with the intention to misinform Armenian pages and users, giving the impression that they are prepared by Armenian sources or pages. Based on the above mentioned, the staff of the Human Rights Defender's Office has compiled video evidence, which confirms all of the above and will be sent to the relevant international bodies. Moreover, all the atrocities and scenes of cruelty in these videos have to be presented by the Human Rights Defender without processing/editing, as they are sent to the Armenian pages and users so that our international partners will get informed of the real situation.

The Center for Humanitarian Demining and Expertise SNCO reported that for days on end, the Azerbaijani armed forces committed war crimes against the peaceful population of the Republic of Armenia by also violating the mutual agreements on a humanitarian truce. The adversary’s UAV strikes damaged the following peaceful residential settlements of the Republic of Armenia: Vardenis, Mets Masrik, Sotk of the Vardenis region,  as well as Artsvanik and Davit Bek of Syunik. The specialists of the Center conducted discovery and elimination works of the unexploded munition in the above-mentioned residential areas.