October 28. Despite the agreement on a humanitarian truce, the Azerbaijani armed forces rocketed the Maternity Hospital of Stepanakert, capital city of the Republic of Artsakh/Nagorno-Karabakh 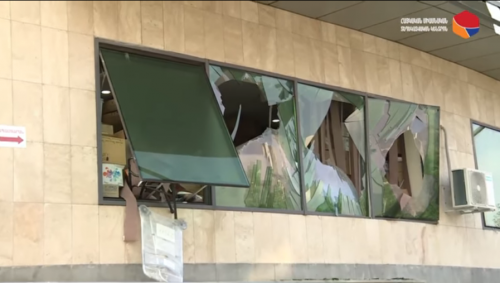 The Armenian Unified Infocenter reported that during the day the adversary kept peaceful settlements in Artsakh/NK under fire. Particularly, Shushi and Stepanakert were attacked by Smerch multiple rocket launchers, as a consequence of which the maternity hospital of the capital city and civilian infrastructure in both cities were damaged.

An entire district was damaged in the capital city. Military aviation was deployed here. As a result of the bombardment, residential houses, cars were damaged or completely destroyed.

The State Service of Emergency Situations of the Republic of Artsakh/NK reported that after Shushi was rocketed, 3 rescuers of Shushi regional department were injured while conducting humanitarian mission. According to the information provided by doctors, their health state is assessed as moderately severe.

The Republic of Artsakh/NK Ombudsman Artak Beglaryan posted a video of the territory of Maternity and Child Health Center in Stepanakert, which was rocketed by the Azerbaijani armed forces on October 28. Artak Beglaryan said, “Azerbaijan continues war crimes against the Artsakh people”.


Vahram Poghosyan, spokesperson of the President of the Republic of Artsakh/NK, reported that the Azerbaijani military political leadership continues its blatant and intended war crimes by using various weapons to target  Artsakh/NK hospitals and schools, residential houses and other objects of public importance, killing or inflicting body injuries to the civilian population. Moreover, in the presence of its popular mass media, the world continues recording all this silently, and in the best case, expresses regret for human losses.

International Committee of the Red Cross in Armenia made a post, “How can you stay safe from COVID-19, when home is not safe? The escalation of the Nagorno-Karabakh conflict could lead to a spike in COVID-19 cases. Thousands of homes have been damaged or destroyed, forcing families to move and seek shelter in crowded basements”. Earlier, the organization expressed its concern that “Homes, schools, hospitals are all being destroyed. The escalation of the Nagorno-Karabakh conflict is devastating lives. Tens of thousands of people are caught in intense fighting”.