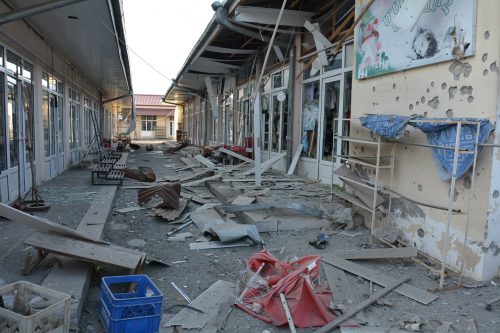 Artsakh/NK Defense Army reported that on October 31, at around 07:08, the Azerbaijani armed forces, violating the agreement reached in Geneva and mediated by the OSCE Minsk Group Co-chairs on not targeting the civilian population, struck Stepanakert and Shushi with missiles. The central market and 1 residential house appeared in the enemy’s crosshairs in Stepanakert. As a result of the adversary’s strikes, civilians have been injured in Shushi.

Earlier, Artsakh/NK Defense Army posted a video material and reported that the hostile force had used phosphorous munitions containing elements of chemical weapons in the Artsakh-Azerbaijani conflict zone, which is a gross violation of International Humanitarian Law, norms, and principles of Customary Law, Geneva Conventions, as well as the provisions of the relevant UN conventions and documents. Apart from the intent to inflict damage on the Armenian forces, the enemy also aims to cause massive forest fires and create real environmental disaster hazards in the area.

Prohibition of the above-mentioned actions and the concomitant rights and values rest primarily in the realm of customary law, whereas the use of such weapons, which do not distinguish between military and civilian targets, while causing environmental disasters and possible human losses, constitute war crimes.

The RA Human Rights Defender posted a video and reported that Azerbaijan used phosphorus munitions, which contained elements of a chemical weapon. The mentioned munitions were used over the forests near civilian settlements.

The Human Rights Defender’s investigation, as well as Artsakh/NK Ombudsman’s fact-finding work not only confirmed this fact, but also found out that many civilians are hiding (during days and nights) in these forests from Azerbaijani military attacks. These munitions have clear effects of mass destruction for environment; now are also used against civilians by Azerbaijani military forces and in this context are forbidden under international law.

The RA Human Rights Defender’s Staff reported that he Human Rights Defender of Armenia and the Human Rights Ombudsman of Artsakh sent joint invitations to all Heads of Diplomatic representations and International organizations accredited in the Republic of Armenia to visit Artsakh/NK.  In the joint invitation, the RA Human Rights Defender expressed his willingness to accompany them to Artsakh, namely Stepanakert and Shushi and, together with the Human Rights Ombudsman of Artsakh in close coordination with respective authorities of Armenia and Artsakh/NK guarantee the security of the mission and ensure its pure humanitarian nature. The invitation aims to show all the international partners presented in Armenia the Azerbaijani armed forces’ atrocities against the civilian population, mass destructions in peaceful settlements, evidence on the use of banned weapons, etc.  This visit “should prove that the international principle “No one should be left behind and no human right ignored” is not a nice expression, but an idea drawn up to protect real people in real life”, says the joint invitation text.

Artsakh/NK Ombudsman Artak Beglaryan called on the international community from the shelled central market. Earlier, he had reported that Azerbaijan continued targeting the civilian communities of Artsakh/NK since the morning of October 31. The village of Herher in the Martuni region in Artsakh/NK was also shelled, as a result of which one civilian was killed in his house. The towns of Martuni, Martakert, and Shushi were also struck by artillery and heavy missiles. The data on the civilian victims and material damage are being clarified.

The Armenian Unified Infocenter reported that during October 31, Azerbaijan continued firing against peaceful settlements of Artsakh/NK. Artsakh/NK capital city Stepanakert (in the morning), Martuni and Martakert (in the afternoon) and then Shushi were targeted by the Azerbaijani armed forces with various rocket launchers. The details on the affected and the damages suffered are being clarified

The RA Ministry of Environment also alarmed about the use of phosphorous munitions by Azerbaijan in Artsakh-Azerbaijan conflict zone and its possible consequences.