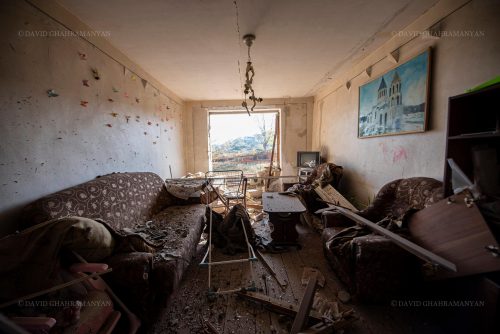 The Republic of Artsakh/NK Ombudsman reported on his Facebook page that on October 29, Azerbaijan continued targeting peaceful communities of Artsakh/NK, including the capital Stepanakert.

Within the fact-finding mission of the Office of the Human Rights Ombudsman of the Republic of Artsakh, it was revealed, that as a result of the missile strikes on the capital Stepanakert, two civilians were wounded. A number of residential houses and cars, as well as vital civilian infrastructure, were destroyed or damaged.

As a result of the missile strike on Shushi town, the residential parts of the city and civilian objects were severely damaged.

Two civilians were wounded in the village of Sghnakh in the Askeran region as a result of Azerbaijani strikes. Regional centers Askeran, Martakert, and Martuni and nearby communities were also struck. There were no civilian casualties, but the communities were severely damaged.


The Human Rights Defender of the Republic of Armenia reported that on the night of October 29, a 84-year-old  civilian captured by the Azerbaijani armed forces, died. Taking into account all the evidence and facts on inhuman treatment and cruelty of Armenians captured by Azerbaijani Armed Forces, the reasonable assumption on the reason of our compatriot’s death becomes clear.

Earlier, on October 29, during the day, he reported that Azerbaijani authorities had announced that the Armenian side had refused to receive the above-mentioned civilian. Armenia’s Human Rights Defender’s investigation proved that this statement does not correspond to the reality. It was confirmed that in reality, according to the recommendation of medical specialists, the current health condition of our compatriot did not allow his transfer. The Azerbaijani authorities are aware of the medical conclusion on inadmissibility of his transfer. The relevant bodies of Armenia expressed their unequivocal readiness in response to my inquiries that the civilian will be returned and received once his health condition allows. On October 29, one more citizen was transferred to the Armenian side.

On October 30, the RA Human Rights Defender reported on his Facebook page that the Human Rights Defender's Office of Armenia was conducting a study comparing the methods of atrocities and inhuman treatment inflicted on the bodies of Armenian servicemen, prisoners of war and civilians by the Azerbaijani armed forces with the methods of atrocities and inhuman treatment used by Islamic State (ISIS) and/or other terrorist groups. The preliminary findings evidence patent similarities.

During the meeting, Arman Tatoyan presented facts on Azerbaijani armed forces’ atrocities and crimes, including the use of banned weapons against civilians in Artsakh/NK and the destructions of civilian infrastructure.  The parties highlighted the importance of the cooperation of the two structures and agreed to deepen the cooperation in matters of human rights protection.

Earlier, the RA Human Rights Defender Arman Tatoyan gave an interview to German DW media, where he mentioned, “It is a humanitarian disaster. There are targeted attacks against civilian settlements and peaceful population. They attack with cluster bombs, cluster munitions, warheads, missiles. And the cities and towns are heavily bombed”.

In his Tweeter microblog, the Republic of Artsakh/NK Ombudsman Artak Beglaryan reported that as a result of Azerbaijan shelling, in Aknaghbyur village of Artsakh/NK, 1 civilian was killed and 6 other civilians were wounded.

On October 30, Foreign Minister of Armenia Zohrab Mnatsakanyan met with Peter Maurer, the President of the ICRC in Geneva. The situation in the Nagorno-Karabakh conflict zone resulting from the large-scale aggression unleashed by Azerbaijan was the main subject of the meeting. Foreign Minister Zohrab Mnatsakanyan provided detailed information to the ICRC President Peter Muerer about the war crimes committed by Azerbaijan against the people of Artsakh as well as the gross violations of international humanitarian law, including Geneva Conventions. The Minister stressed that human rights and their protection are universal, regardless of the status of the territory, and any other interpretation in this regard is absolutely unacceptable.

Armenian civil society organizations made an e-appeal to NATO Secretary General and NATO member states to put the following issues to an urgent discussion in the agenda of the NATO Parliamentary Assembly:


📌Preventing the direct or indirect involvement of Turkey, a NATO member state, in the Nagorno Karabakh conflict;

📌Precluding Turkey from recruiting terrorists and engaging them in the hostilities against Nagorno Karabakh; and

📌Conducting an impartial investigation into the war crimes in the hostilities waged with Turkey’s support and taking effective steps to prevent such crimes from occurring.