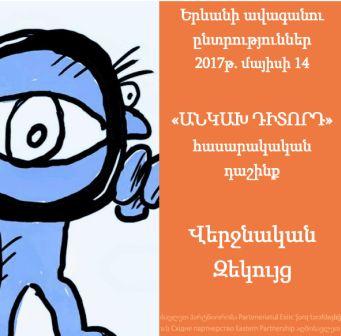 Yerevan City Council Elections were held on May 14th, 2017.

“Independent Observer” Public Alliance believes that the Yerevan City Council Elections of May 14, 2017 were held in a blatant violation of the essential principles of democratic elections.

Reaffirming the recommendation presented in the report on RA National Assembly elections and in addition to them, “Independent Observer” Alliance recommends the following:

Legally stipulate the reasonable volume of credible information on electoral violations, electoral fraud, and particularly distribution of electoral bribe  and abuse of administrative resources for cancelling the registration of a candidate (including a party) or the election results Decide on the final results of the elections after allowing reasonable time for adequate investigation of reports about electoral fraud and electoral violations Amend the Electoral Code to stipulate the specifics of processing urgent matters, to set up a hotline and to allow sending applications and complaints to the commissions electronically.