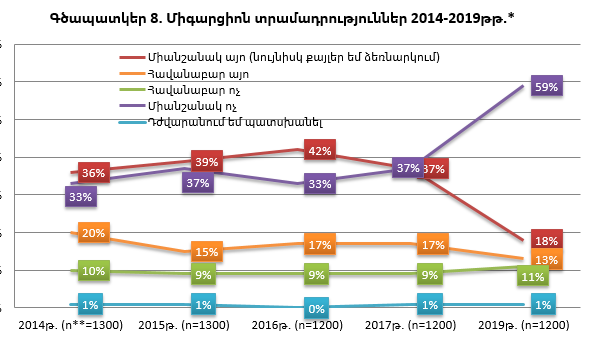 In May 2019, a sociological survey was conducted on the whole territory of the Republic of Armenia by Helsinki Citizens’ Assembly-Vanadzor with the involvement of “Advanced Public Research Group” non-governmental organization. The survey was conducted for the 5th time since 2014 and was aimed at discovering the public sentiment towards international organizations, namely, European Union and Eurasian Economic Union.

Interesting facts have been recorded as a result of the comparison of surveys conducted in different years.

It is noteworthy that in 2019, as compared to 2017, the number of people who prefer membership of both organizations has increased more than twice and reached 30%.

Something interesting was also recorded regarding the positions by regions. According to the comparison of years, the preference of membership of EEU reduces in all the regions, while, in case of EU, the image is not definite. The growth trend is more clearly expressed in Yerevan city, Aragatsotn, Ararat, Lori and Vayots Dzor regions.

In all the years observed, female representatives were more prone to membership of EU.

By years, those having elementary, secondary, secondary vocational and higher education are more inclined to joining EU.

Female representatives aged 18-45 who reside in the capital and whose family’s average monthly income is higher than 65.001 drams make the majority among those inclined to the RA membership of European Union.

RA membership of EEU is mostly preferred by male representatives older than 61 who reside in rural areas and whose family’s average monthly income does not reach 35,000 drams.

The majority of those preferring the RA membership of EEU belong to the lowest income group.

It is noteworthy that while in previous years there was a clear connection between the migration intentions and predilection for membership of international organizations (the majority of those preferring the RA membership of European Union were persons who expressed an intention to migrate), no such connection was discovered in 2019.

In general, the number of those who do not want to migrate has sharply increased. The number of persons who are optimistic about the country’s future has also increased. In our opinion, this can be put down to the social-political events that took place in Armenia in 2018 and public perceptions of those events. The number of optimists is greater among those who are in favor of EU membership.

The survey results are presented in detail HERE

“Compulsory vaccination” in the context of fundamental human rights and principles of a democratic state
On October 2, Azerbaijani armed forces sent missile strikes on a number of towns of Artsakh/Nagorno-Karabakh, including the capital city Stepanakert. 10 civilians were injured