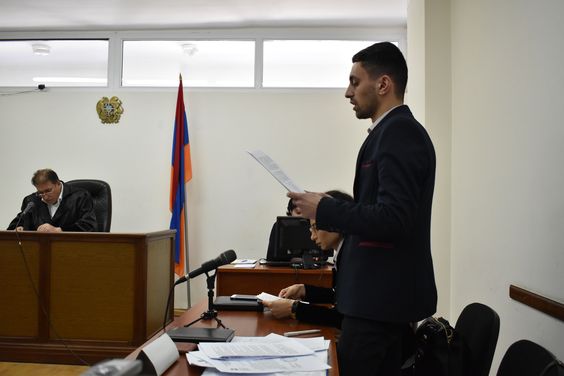 At the previous court session, lawyer Artak Voskanyan, representative of ‘G and M’ LLC involved in the construction work as a third person, did not appear before the court and asked to postpone the session.

Lawyer Artak Voskanyan appeared before the Court during the court session on October 9, 2018.

Besides, A. Abroyan, head of Historical and Cultural Monuments Protection Agency of the RA Ministry of Culture, stated during his conversation with ‘Azatutyun’ that he did not give a permit upon the implementation of construction work and that Vanadzor municipality got ‘G. and M.’ LLC construction work permit from the Ministry of Culture by fraud.

Artak Voskanyan objected to the petition presented. The Court rejected it.

After that, the sides presented their opening speeches, then HCA Vanadzor representatives requested to postpone the court session with the purpose of presenting additional proofs.

By the way, on September 7, 2018, based on A. Abroyan’s interview with ‘Azatutyun’, HCA Vanadzor reported a crime to the RA Prosecutor General’s Office. However, M. Avetikyan, investigator of the RA Police Lori Provincial Department Vanadzor Taron division, refused to initiate a criminal case, since ‘the prepared materials did not give him trustworthy data on the crime’.

According to A. Abroyan’s explanation, in his speech, he wanted to say that if his signature stood on the document related to the change of ‘Artsakh’ park state, then it was a fraud. With regard to giving a permit upon the construction of an entertainment center on the territory of the park, he mentioned that his subordinate employee submitted the document to get the deputy minister’s signature without asking his opinion.

On October 8, 2018, HCA Vanadzor appealed investigator M. Avetikyan’s refusal of initiating a criminal case, since actions of the body conducting the proceedings were not aimed at checking the information of the program and disclosing the persons who committed the crime. Among other things, the body conducting the proceedings did not assess the question whether the deputy minister had the authority to sign that document and did not touch upon the letter of the Ministry of Culture to Vanadzor municipality requesting to terminate the construction work.

The RA Prosecutor General’s Office has not responded yet.