Judge S. Baghdasaryan attributes the Court’s failure to provide the defendant’s participation in the court session to the overloaded schedule of the Court 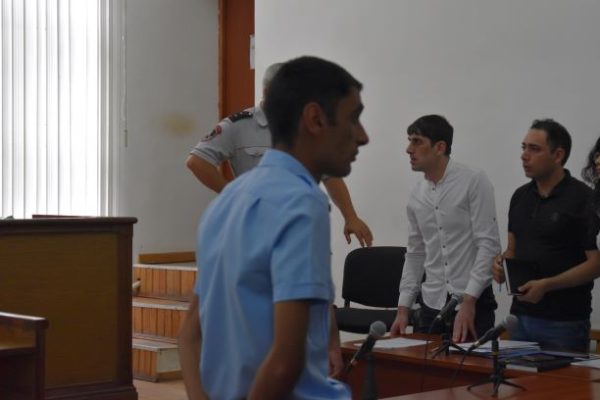 On October 9, 2018, Lori region General Jurisdiction Court continued the examination of Hovik Matinyan’s case, who was charged with robbery on the basis of one testimony.

It should be reminded that H. Matinyan, who left the RF in October 2017 and was hosted in Gyulagarak village, was accused of the robbery of gold jewelry worth 700,000 AMD by A. Matinyan, another resident of the village. It is noteworthy that at first, he described the person who committed the theft one way and later changed his testimony reasoning that he was confused on the day of the theft.

Besides the victim’s testimony, there is no other fact proving Hovik Matinyan’s guilt in the criminal case. The defendant and his relatives claim that he is unjustly charged with committing theft.

During the court session of October 9, 2018, the Court examined the written and material evidence and then listened to the defendant’s testimony.

During the examination of the written evidence, lawyer A. Mkoyan made observations on the relevance of the proofs.

After the examination of the proofs, the Court proceeded to the defendant’s interrogation. He was first interrogated by the defense side and then prosecutor Gurgen Safaryan announced that he needed time to formulate questions to the defendant and asked to postpone the court session.

While the Court was discussing the question of postponing the session, defender Arshak Mkoyan made announcements on the Court’s actions. Mentioning the cases of not providing the defendant’s participation in the previous court sessions, he pointed out the fact that on the one hand, the Court fails to properly provide the defendant’s participation in the court sessions and on the other hand, refuses the petitions of changing his preventive measure.

H. Matinyan’s other defender Ani Chatinyan also states about the reluctance of the Court to accept the defense side petitions of changing the preventive measure and the rejection on no grounds.

She mentions that on the basis of one proof, one cannot be charged, let alone sentenced. There should be other proving circumstances which do not exist in this case. The basis of the case is only the victim’s testimony, which is not definite, either. Moreover, in these circumstances, H. Matinyan has been in custody for nearly a year.

It should also be noted that the previous court session started with a delay of 1 hour and the Court announced that it was impossible to bring the defendant to the Court, as, according to him, the penitentiary institution had not received the Court’s letter. What is even more, the preceding court session had been postponed for 1 month without starting and the Judge appearing in the courtroom.

Contrary to Judge S. Baghdasaryan’s statement made during the court session on October 1, according to which the penitentiary institution had not yet received the Court’s letter, head of Vanadzor Penitentiary Institution Artak Hovhannisyan replied to HCA Vanadzor lawyer Ani Chatinyan’s written enquiry on October 5, 2018, stating that he had not received any letter or notice of providing Hovik Matinyan’s presence at the scheduled court session.

With regard to the lawyer’s announcement at the Court, Judge S. Baghdasaryan indignantly responded that everyone was well aware and should know that the Court was overloaded with work and thereby shortcomings and failures were possible.