October 14. A UAV of the Azerbaijani armed forces launched strikes on residential settlements in Gegharkunik province of the Republic of Armenia 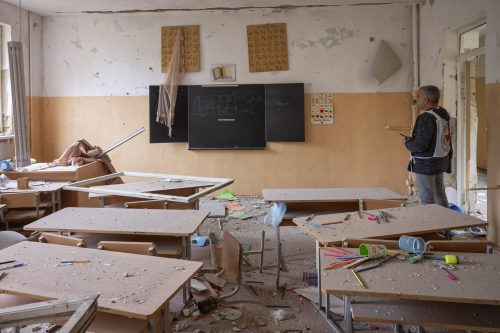 The doctors assess his health condition as severe.

The RA MoD representative Artsrun Hovhannisyan informed that on October 14, the Azerbaijani armed forces continued violating the humanitarian ceasefire and this time targeted one of the hospitals located in the north-eastern direction, where civilians also get treatment.

The above-mentioned is a gross violation of the international humanitarian law and customary law norms and principles, which prohibit targeting hospitals and other places where wounded persons are kept. This is already an explicit military crime and the full responsibility of its consequences lies on the military political leadership of Azerbaijan.

The NKR Infocenter reported that the ceasefire agreement made on October 10 had also been violated by Azerbaijan during the night before. In particular, various weapons targeted civilian infrastructure in the direction of Shahumyan, Martakert and Hadrut regions.

The International Committee of the Red Cross in Armenia reported on their Facebook page, “Hundreds of buildings have been destroyed by heavy artillery fire and missiles during the escalation of the Nagorno-Karabakh conflict. The impact it has on civilians is devastating. We strongly condemn indiscriminate shelling and other alleged unlawful attacks using explosive weaponry in populated areas”.

The RA/NK Ombudsman’s Staff got verified information that as a result of indiscriminate shelling of Martakert town, the employee of “Artsakhenergo” company Nver Pargev Grigoryan had been killed during realization of his job duties.

Photo: International Committee of the Red Cross in Armenia